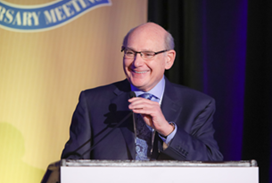 Lawrence J. Singerman, MD, was awarded the J. Donald M. Gass Award at the commemorative 50th Anniversary Meeting of the Retina Society, held in Boston, Massachusetts, in October.  Julia Haller, MD, Ophthalmologist-in-Chief of Wills Eye Hospital and chair of the Awards Committee of the Retina Society, announced that “Dr. Singerman was chosen as the recipient for this special award because of his long and productive career as a pioneering ophthalmic clinician and scientist and because of the impact he has made as a pillar of the international retina community.”

Dr. Haller presented the award to Dr. Singerman and saluted him for his “inestimable contributions to the world of medicine and the community at large,” his “professionalism and commitment to excellence,” and his success in making “every group and every institution with which he has been associated better and stronger.”  He was humbled by the award, which was named after one of the Retina Society’s most beloved members and one of Dr. Singerman’s personal heroes, J. Donald M. Gass, MD. 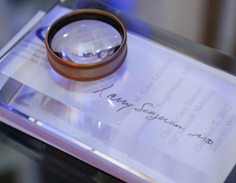 Dr. Singerman had the honor of giving the keynote address at the meeting, on the topic of “Clinical Perspectives on our Improvements in the Management of Age-related Macular Degeneration over the Last 40 Years.”  He discussed the evolution of therapies over the years for AMD and the amazing progress that has been made towards treating neovascular AMD and preventing blindness from the disease.  Dr. Singerman was privileged to be a principal investigator in most of the studies that led to FDA approval of these therapies for neovascular AMD.

Copies of the award presentation and lecture are available on the link below.  It is suggested that you DOWNLOAD the video first before playing.

Click here to open the video in a new window. Once the video is prepared, you can  use the 'download' button in the top right corner to save it for viewing on your local computer. 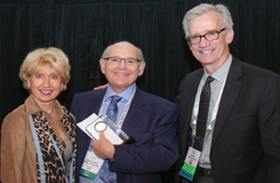