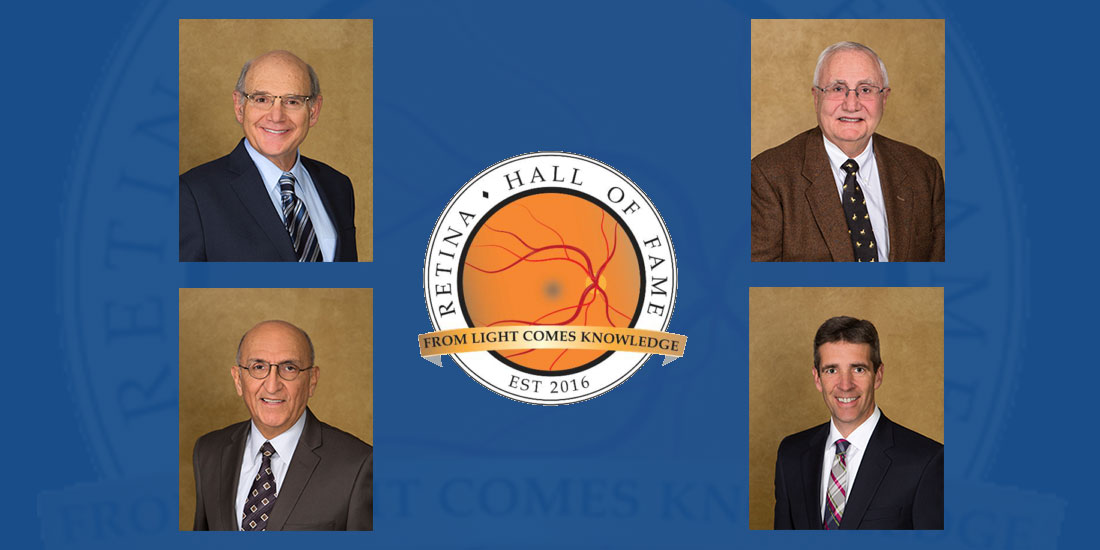 Congratulations to our Retina Associates of Cleveland physicians who have been officially inducted as Charter Members of the Retina Hall of Fame!

Four Retina Associates of Cleveland physicians, Lawrence Singerman, MD; Hernando Zegarra, MD; Nick Zakov, MD; and David Miller, MD, have been recognized for their significant achievements in the practice of medicine and their contributions to the retina subspecialty. Dr. Zakov is also a Founding Member of the RHOF Board of Directors and serves as the Board’s Secretary/Treasurer.

The Retina Hall of Fame was established in 2016 to honor the significant achievements and contributions of leaders in the field of retina disease.  The retina specialists hand-picked for inclusion in the Retina Hall of Fame were recognized for their innovation and dedication to both patients and research over the course of their professional careers.  They have a passion for learning, collaborating with their colleagues to find new advancements in the treatment of retinal disease, and helping people.  Thousands of patients have had their vision saved from permanent loss and have benefitted from the revolutionary therapies discovered by this exclusive group of physicians.

In addition to Dr. Zakov, the other Retina Hall of Fame Founding Members who serve as the original Board of Directors are Jerald Bovino, MD, RHOF President; Tarek Hassan, MD; Mark S. Humayun, MD, PhD; and John T. Thompson, MD.

Dr. Singerman is a Clinical Professor of Ophthalmology at Case Western Reserve University/University Hospitals of Cleveland and Bascom Palmer Eye Institute of the University of Miami. He founded Retina Associates of Cleveland, a retina group practice that now includes 10 retinal specialists and over 130 employees in 9 offices. He has been a principal investigator in more than 120 multicenter clinical research trials and authored over 370 publications. In 1977, Dr. Singerman founded the Macula Society, an international association of leading investigators and clinicians in the field of retinal diseases.  He is the recipient of the Macula Society’s Arnall Patz Medal and J. Donald M. Gass Medal and the first recipient of the Lawrence J. Singerman Medal for outstanding contributions in clinical trials.

Dr. Zegarra received his BS and MD degrees from Cayetano Heredia University in Lima, Peru. He completed his ophthalmology and retinal training at the Cleveland Clinic and Devers Eye Clinic of the Good Samaritan Hospital, Portland, Oregon.  Every year since 2011, Dr. Zegarra has been recognized on the Best Doctors in America list of top retinal disease specialists.

Dr. Miller serves as the Medical Director of Cleveland Eye and Laser Surgery Center, the largest retinal surgical facility in the region.  Best Doctors Inc. has recognized Dr. Miller in its "Best Doctors in America" list of top retinal disease specialists every year since 2011.  Dr. Miller has also been recognized in Cleveland Magazine’s annual publication of Top Doctors.